An attractive pitfall of popular history is the Pivotal Moment.  The writer centers on an event or an idea that signals a shift in the course of history, leading somewhere other than where it had been heading.  The Donation of Constantine, the First Crusade,  the invention of moveable type, Galileo’s confrontation with the Church, Newton’s codification of the law of gravity, things like that.  The point being made is that these events are so tectonic that Everything Changes.

The pitfall is not so much that they are wrong but that they are taken as solely responsible, isolated moments, forks in the road.  It is easy to ignore or forget everything else around them.  Focusing only on the Emperor Constantine can suggest that without him, Christianity might not have become the official religion of Rome and thus history might have taken a different course.  (Personally, I think Constantine’s moving the capital of the empire east was far more significant as something he alone could have done, or caused to be done.)  It overlooks the fact that Christianity had become a tremendous movement by then.  Had Constantine been of a mind to resist it, he might have delayed its ascension for another emperor, but it would have become what it did in any event.  Constantine was being politically astute.  (After all, he left Rome to the Church even as he moved the center of imperial power to the new city of Constantinople.  It’s telling that he chose to isolate them geographically.)  The Crusades were important as expressions of political currents leading to a contraction of Rome’s vision of itself and certainly set the stage for subsequent events in the Levant, but not even the death of Richard the Lionheart changed all that much in even British history.

Newton might be arguably more important, at least for the calculus, but such things were in the wind.  Leibniz, rival and competitor to Newton, invented a calculus, and while the debate goes on as to who was first and which was better, such a mathematical tool was going to emerge.

Picking pivotal events, therefore, is a challenge.  Placing them in context is a duty and one it is often tempting to underplay.  It makes a better story if the singular event is the hero, as it were.  But it can sometimes make for bad history.

Stephen Greenblatt avoids that problem admirably in The Swerve: How The World Became Modern.  Even though the title is a bit hyperbolic and suggests the kind of history more consistent with a tabloid approach, what one finds within it first-rate history written for a general audience about a rather arcane subject:  the way ideas can change entire cultures. 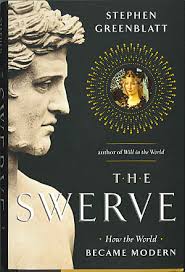 The story is about the discovery of a manuscript, De Natura Rerum, an epic poem by the Roman Lucretius (99 B.C.E. to 55 B.C.E.), an acolyte of Epicurean philosophy who died just before Rome became an Empire instead of a Republic.  De Natura Rerum—“On the Nature of Things”—is a a surprising work in that it espouses ideas which we think of now as wholly modern.  That the universe is composed of atoms, that time and space are unbounded, that life evolves, that matter is all there is.  If one squints, one sees the foundational ideas of contemporary physics in all this.  Physics and cosmology.

But it continued on to suggest that pleasure is the highest moral purpose, that doing that in life that increases one’s pleasure and the pleasure of those around us, is the primary aim of a moral life.

It’s easy to see how this might run afoul the kind of moral philosophy that has dominated Western culture since before the rise of Christianity.  But Lucretius was not advocating hedonism, but the more constrained program of Epicurus, the 4th Century B.C.E.  Greek philosopher who advocated philosophy based on the two standards of ataraxia and aponia, namely peace and freedom from fear (ataraxia) and the absence of pain (aponia).  To do this, one must lead a self-sufficient life surrounded by friends and occupying the mind with constructive and pleasing contemplations and treating the body to that which brings pleasure.  Though the name has been linked to self-indulgence, hedonistic abandon, and all the ills of unrestrained pleasure-seeking, what Epicurus had in mind was something very different, and defined by moderation.  The kind of self-indulgence we assume attends such a life he did not see as peaceful, pleasurable, or free from pain.

He also believed that when we die, nothing survives.  The soul is an aspect of our physical existence like anything else and fades to nothing once the container ceases to function.

Lucretius wrote a poem of purportedly great beauty in support of this philosophy.

It is a common misapprehension that the Greco-Roman world of that time would have embraced all this eagerly.  The fact is, Christianity rather easily took root in the Roman Empire because it bore much in common with ordinary Roman morality.  Epicurus was almost as disdained under the Caesars as his ideas were later despised under the popes.  Christianity succeeded largely because of its commonalities with pagan culture, a culture which found Epicurean ideas almost as off-putting as any later devout Catholic might.

A culture which fully embraced the spiritual side of attitudes toward the material world that relegated this life to a condition of transient, burdensome necessity, pain, and suffering which must be borne with the faith and dignity of an acolyte who seeks a better existence in an afterlife, fully convinced that nothing in this realm matters.  A culture that had no use for the idea of atoms, that believed the universe to be bound tightly in a very local set of spheres, and with a time limit on its existence that was easily comprehensible—a few thousands of years.  People wanted the comfort of believing existence to be closely bound, finite, with a way out.

Lucretius’ poem faded from memory.  Rome’s collapse was as much a result of neglect as of catastrophe, and by the 9th century, much of the written legacy was sequestered in monasteries, scattered, mouldering, often ignored, certainly unstudied.  It required that civilization rise back to a certain material level before interest in ideas, old manuscripts, and the past could matter.

Humanist meant something a bit different in the 14th and 15th centuries than it does today, but it is possible to see the connection.  Poggio was one of that group of avid collectors who scoured the monastic libraries for old books.  Most of them were copies of even older books, the remnants of a vast ancient world epitomized by the Library of Alexandria, most of which seemed to offer glimpses into a Golden Age.  Aristotle had long been seen as the basis for rationalizing certain troublesome aspects of Christian theology.  The flood of recovered books from the Reconquista has been both benefit to a slowly recovering European civilization and troublesome bane to a Church that saw itself as the final arbiter of what it was proper to know, to consider, to believe.

Poggio worked for a succession of popes.  In his “spare” time, he hunted manuscripts, and helped return them to circulation.  He found Lucretius’ tome in Germany, a 9th century copy.  According to Greenblatt, he may not even have realized what it was.  He’d only heard it mentioned with respect and some reverence in other ancient manuscripts.

The Swerve reveals the events surrounding the poem’s creation, loss, rediscovery, and subsequent dissemination throughout a culture that was on the verge of becoming something other than what it had been.  The ideas embraced in the eloquent lines are ideas with which we are more than familiar today.  Indeed, they are common coin in debates on the right and the good and resonate in the foundations of modern science.  Greenblatt suggests that it was this book—its reintroduction to a wide audience—that caused the veer into what has become a secular civilization.

He is careful, however, to contextualize his assertions.  Something like this, it seems, would have had to be invented if it hadn’t been found.  Its arrival at the onset of the Renaissance was fortuitous.  Coming along when it did—when science was beginning to coalesce out of the mish-mash of alchemy and reactions to Aristotelianism, when people like Bruno, Galileo, Newton, and many others were present to respond—hastened events, gave focus to certain schools of thought, fed the furnace that was recasting conceptualizations of nature and the universe.  It lent the weight of a more complete philosophical conception to the fragmented components of what would one day become the modern world.

It is perhaps surprising (and somewhat disillusioning) that the arguments spawned by De Natura Rerum are still being waged today.  Reading Greenblatt’s examination of the central ideas of the poem and the subsequent responses to it is itself a lesson in historical context, because we can look around and find exactly the same kinds of debates—and sometimes bitter battles—going on around us.

But it is also encouraging.  Ideas survive.  People keep them alive, even over centuries, millennia.  Greenblatt is, in his own way, continuing that fragile, necessary, and yet astonishingly powerful tradition, passing on to the future what is important not only for today but what has been important all along.